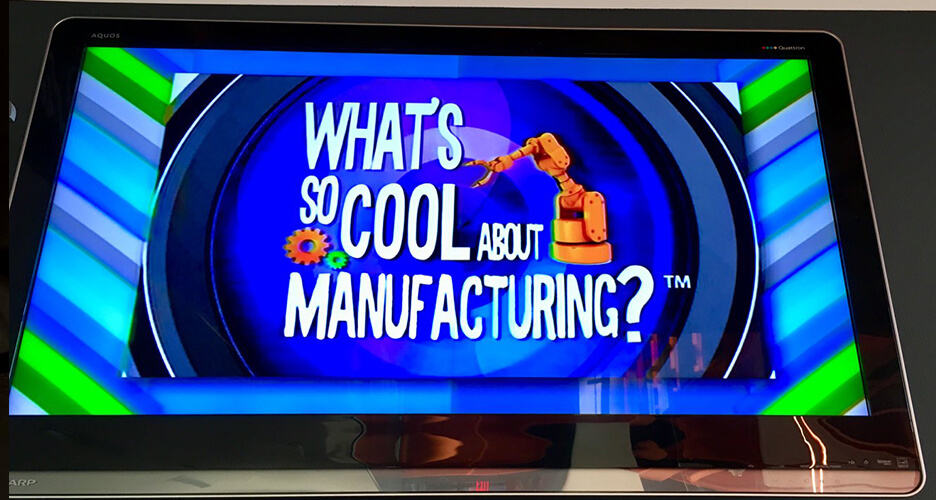 The Lehigh Valley’s What So Cool About Manufacturing? student video contest capped off its fifth anniversary Tuesday night with a record number of online votes and top prizes for Bethlehem’s Northeast Middle School and Northampton Area Middle School.

More than 900 people attended Tuesday’s awards ceremony for the flagship What’s So Cool About Manufacturing? contest at the SteelStacks Center in Bethlehem. The 2018 contest featured 30 teams of middle school students representing 22 school districts in Lehigh, Northampton, and Carbon counties. The contest’s Platinum Sponsors were the Manufacturers Resource Center (MRC) in Allentown, PA; Workforce Board of the Lehigh Valley; Air Products; PNC Bank; and J.G. Petrucci Company.

The student team from Bethlehem Northeast earned the contest’s Outstanding Program Award for its profile of Atlas Machining & Welding. The Northampton Area team earned its fourth straight Viewers Choice Award for its profile of B. Braun Medical. A total of 129,897 votes were cast at WhatsSoCool.org, topping the contest’s previous record of more than 123,000 votes in 2014.

The annual What’s So Cool About Manufacturing? video contests excite students to explore cool manufacturing careers and produce profiles of companies throughout Pennsylvania. Judges in each regional contest bestow a variety of awards, and each contest features an online vote for its Viewers Choice Award.

Created by MRC in 2013, the What’s So Cool About Manufacturing? contests draw entries from nearly 200 teams across Pennsylvania. The teams of students and teacher coaches receive camera equipment, software, and professional guidance as they learn to script, record, and edit their video stories. The contest’s objective is to change students’ perceptions about manufacturing careers.

The What’s So Cool About Manufacturing? contests are supported regionally by their sponsors and partners. Twelve contests will be held Pennsylvania during the 2017-2018 school year. These contests involve students from 39 of Pennsylvania’s 67 counties – a combined area that represents more than 9 million of the state’s 12.7 million residents. The contest format also has been adopted by groups in 11 additional states.

To mark the Lehigh Valley contest’s fifth anniversary, team teacher coaches who have participated in each of the five years were honored with service awards.

Posted by What's So Cool About Manufacturing Lehigh Valley on Wednesday, February 28, 2018

Winners of additional awards Tuesday night were as follows:

Additional sponsors of the 2018 Lehigh Valley contest were as follows: